Which Varieties of Hydrangea Can I Prune Back Now?

As we close in on the time of year when hydrangeas lose their leaves for winter we receive calls about pruning them.  “Can I cut them back?”  “If so, will they bloom next year?”

All good questions and the answer to that question depends upon the variety of hydrangea that you have.  Whether it blooms on last years stems (old wood) or on new growth (new wood). 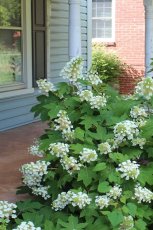 Oakleaf Hydrangeas (Hydrangea quercifolia) – bloom on the previous season’s growth so prune right after flowering in the fall or in early winter. Don’t take more that 1/3 of the total growth when pruning. Examples are:  Pee Wee, Alice, Ruby Slippers.

This is general pruning information.  I suggest verifying the species you have and reading advice that is specific to that species prior to pruning.